You don't have any products in your shopping cart. Check out our online shop for our impressive plant range.
View cart
No items in wishlist

What an incredible experience to be back at the RHS Chelsea Flower Show 2021. We had such an amazing time speaking to all the RHS members and the public throughout the event. But what made it even more special was coming home with a gold medal for our 'Canopy of Colour' display from the RHS. Learn more about the symbolism and thinking behind the relevance to this display.

A rainbow is formed from a continuous spectrum of wavelengths of light, so why do we perceive it as seven separate bands of colour?

Our perception of a rainbow is coloured by our expectation that there are seven colours but there aren’t seven distinct bands only multiple colours blending and shading into one another. Around 1665, Isaac Newton performed experiments with a prism producing a spectrum in which he identified seven colours. Prior to that, the spectrum had been thought to have five colours. For example, in his book Experiments and Considerations Touching Colours, Robert Boyle described the spectrum he produced with a prism as “denoting the five consecutions of colours Red, Yellow, Green, Blew, and Purple”.

This book was published in 1664, just before Newton started his experiments. However, the number seven had long been considered mystical, denoting perfection and completeness. This sort of mysticism fascinated Newton as much as science, so he thought there must be seven colours in the rainbow. He added orange and split purple into indigo and violet but it is difficult to see the latter two as individual colours in the spectrum. (Perhaps for this reason the Pride flag only has 6 colours ( omitting Indigo)

Rainbows symbolize much more than just a range of colours combined to make a whole. They are symbols of hope, promise, peace, equality, luck, new beginnings, and eternal life.

Hope as expressed in a rainbow is frequently tinged with pathos. According to Irish legend, the end of a rainbow marks where leprechauns have buried a pot of the gold they stole from the Vikings. But since you can only see a rainbow if you are far away from it, and they appear to move as you move, the promise remains elusive. Somewhere over the rainbow, “dreams come true” and “troubles melt like lemon drops”, as Judy Garland sang in the Wizard of Oz musical. But this magical place is unattainable, she laments: “Birds fly over the rainbow – why then, oh why, can’t I?” 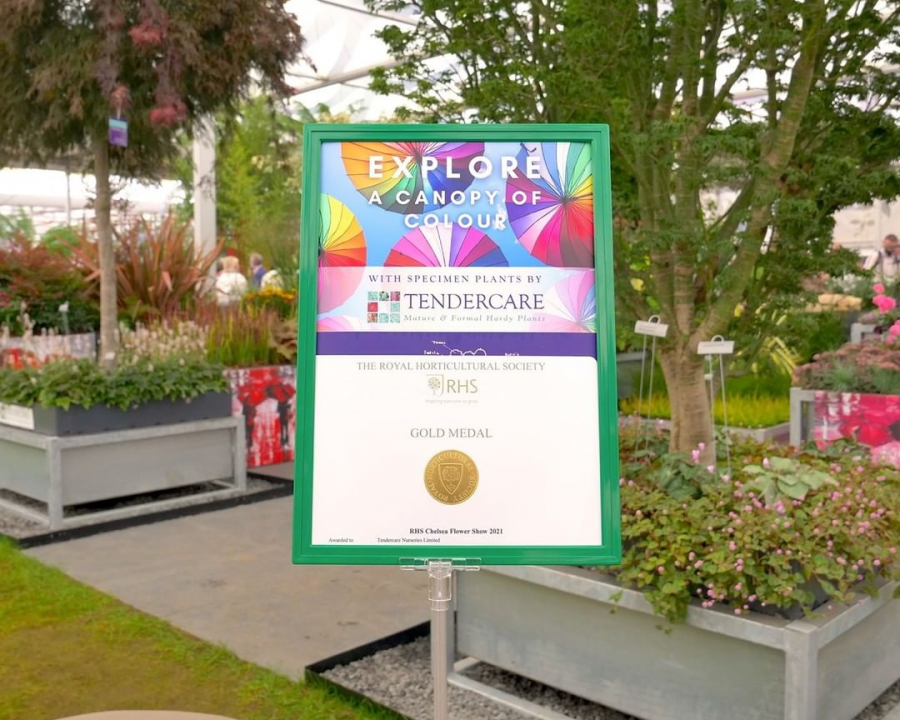 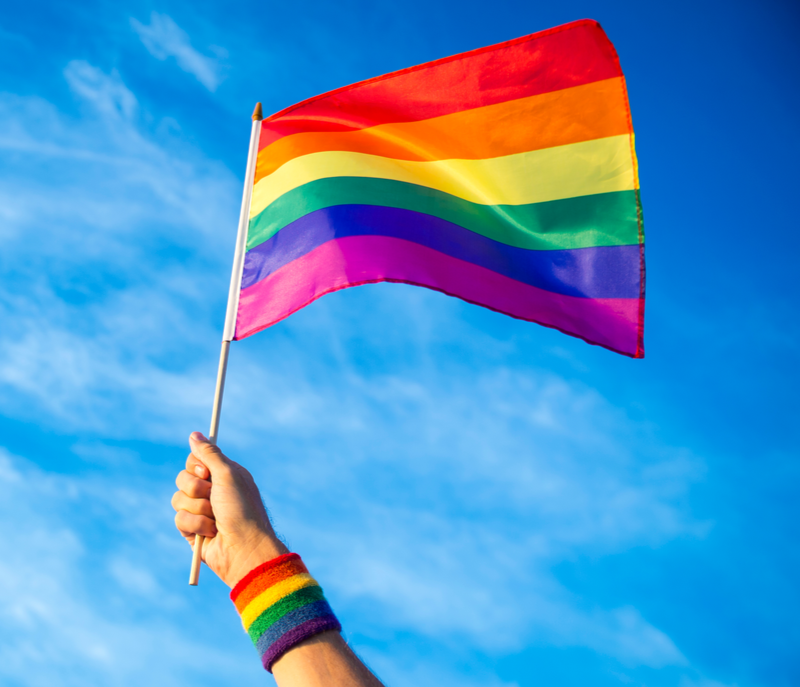 More recently, the diversely coloured rainbow has been used to reflect diversity in sexuality, becoming the international symbol of the gay movement. Gilbert Baker, an artist and drag queen, first created the rainbow to depict pride, defiance and hope for acceptance, respect and equal rights for this marginalised group.  Baker saw the rainbow as a natural flag from the sky, so he adopted eight colours for the stripes, each colour with its own meaning (hot pink for sex, red for life, orange for healing, yellow for sunlight, green for nature, turquoise for art, indigo for harmony, and violet for spirit).

“The NHS Rainbow Badge is a simple visible symbol to let people know that you can talk to us about who you are, your identity and how you are feeling - without being judged.”

The famous six-colour pattern has come to represent LGBTQIA+ people worldwide, cropping up on everything from buttons and pins to sneakers and scrunchies.

The graphics on the stand are by Artist Leonid Afremov – born in the same town in Belarus as Marc Chagall and was influenced by him in his work as an impressionist painter using the palette knife in his techniques.

The Origins of the Pride Flag

Before the rainbow pride flag was created, there was another symbol for the LGBTQIA+ community: a pink triangle. This triangle, however, had a loaded, anti-gay history. Throughout the Holocaust, the Nazis forced those whom they labelled as gay to wear inverted pink triangle badges, just as they forced Jewish people to wear a yellow Star of David.

In the late 1970s, the pink triangle was somewhat reclaimed by the gay community. "Gay people wear the pink triangle today as a reminder of the past and a pledge that history will not repeat itself," read one 1977 letter to the editor in Time. Still, activists recognized the need for a more empowering symbol.

Enter: Gilbert Baker, the man who would create the first rainbow pride flag. In the late '70s, Baker was living in San Francisco when he met writer Cleve Jones, filmmaker Artie Bressan, and rising activist Harvey Milk. The trio encouraged Baker to create a positive emblem for the LGBTQIA+ community.

Baker agreed and he looked to his community for inspiration, specifically those dancing at San Francisco's music venue Winterland Ballroom one night. As excerpted on the website for his estate, Gilbert's memoir, Rainbow Warrior, includes his memory of deciding to make the rainbow flag:

The crowd was as much a part of the show as the band. Everyone was there: North Beach beatniks and barrio zoots, the bored bikers in black leather, teenagers in the back row kissing. There were long-haired, lithe girls in belly-dance get-ups, pink-haired punks safety-pinned together, hippie suburbanites, movie stars so beautiful they left you dumbstruck, muscle gayboys with perfect mustaches, butch dykes in blue jeans, and fairies of all genders in thrift-store dresses … We were all in a swirl of color and light. It was like a rainbow.

A rainbow. That's the moment when I knew exactly what kind of flag I would make.

The earliest version of Baker's rainbow pride flag, from 1978, included eight colours: hot pink, red, orange, yellow, green, turquoise, indigo, and violet. According to the website for his estate, Baker assigned a special meaning to each colour of his pride flag.

Almost immediately after the eight-colour rainbow pride flag was unveiled, it was modified. Following the assassination of Harvey Milk on Nov. 27, 1978, demand for the flag increased dramatically. Since hot pink fabric was difficult to come by, Baker dropped that stripe from his flag. In 1979, the flag was changed again. According to Baker's estate, that was because when it was hung vertically from the lamp posts of San Francisco's Market Street, the centre stripe (turquoise) was obscured by the similarly-coloured lamp post itself. Baker dropped yet another stripe, which resulted in the six-stripe version of the flag we use most often today—red, orange, yellow, green, blue, and violet. The blue that replaced the indigo now symbolizes harmony.

Here are the meanings behind the colours in the current pride flag:

Do you want to know more about the plants that we used? Check out our plant list and order them online!

Plants used at our exhibition 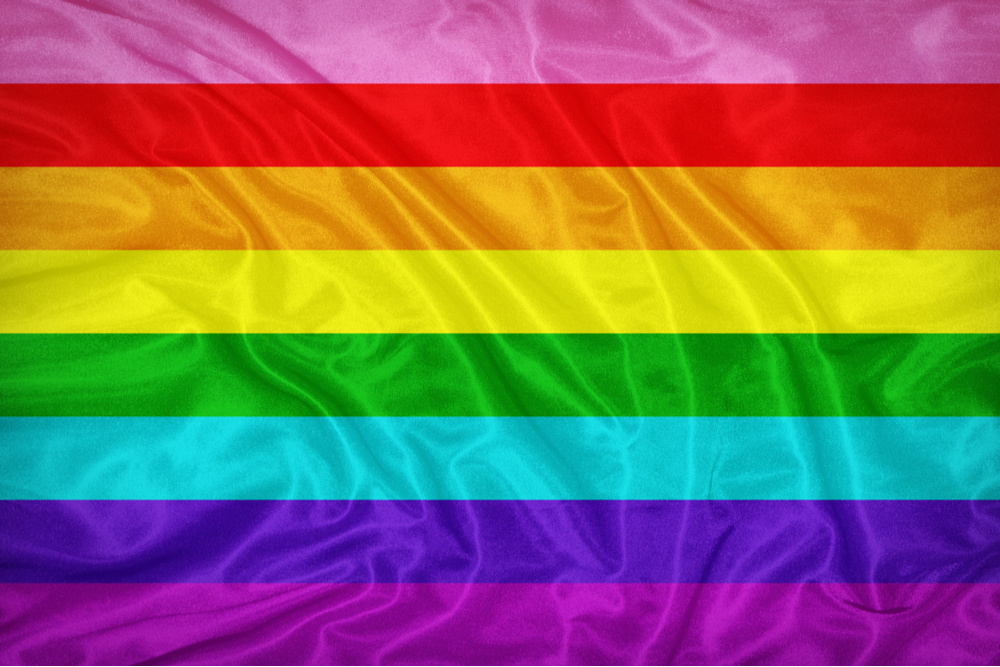 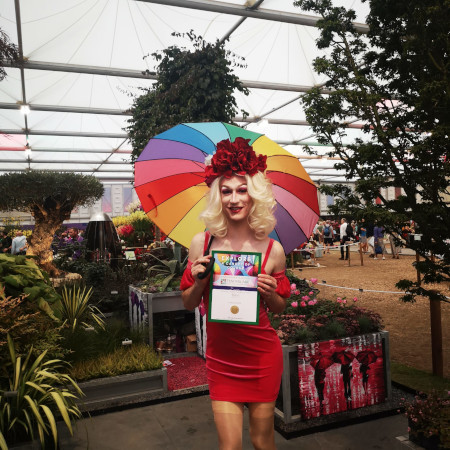